Vietnamese traditional music or folk music is one major branch of Vietnamese music, truly reflecting the typical characteristics of people, culture, customs, geography, etc. of Vietnam, stretching throughout the history of the nation. Since the 20th century, Vietnamese music has been influenced by the foreign music styles such as China, Korea, the United States, United Kingdom but it still keeps its unique beauty, which is shown in the existence of Vietnamese traditional music as well as playing an important role in the culture in Vietnam.

An Overview of Vietnamese Traditional Music

Vietnamese traditional music was born very early. Ever since ancient times, Vietnamese people have been very passionate about music and considered music an integral part of their life. Therefore, in the process of historical development, the residents have constantly created many musical instruments and musical genres to express their feelings and emotions, gain more motivation for daily work, and get out of the stress in life. You can listen to the melody of lullabies, children’s songs, types of music in worshiping rituals, funerals, or conversations among members of the community, in entertaining activities, perform in the singing contests, epics, the sweet songs of the jongleurs, “Don Ca Tai Tu” – the traditional music of the Southern people, and the traditional opera, etc. 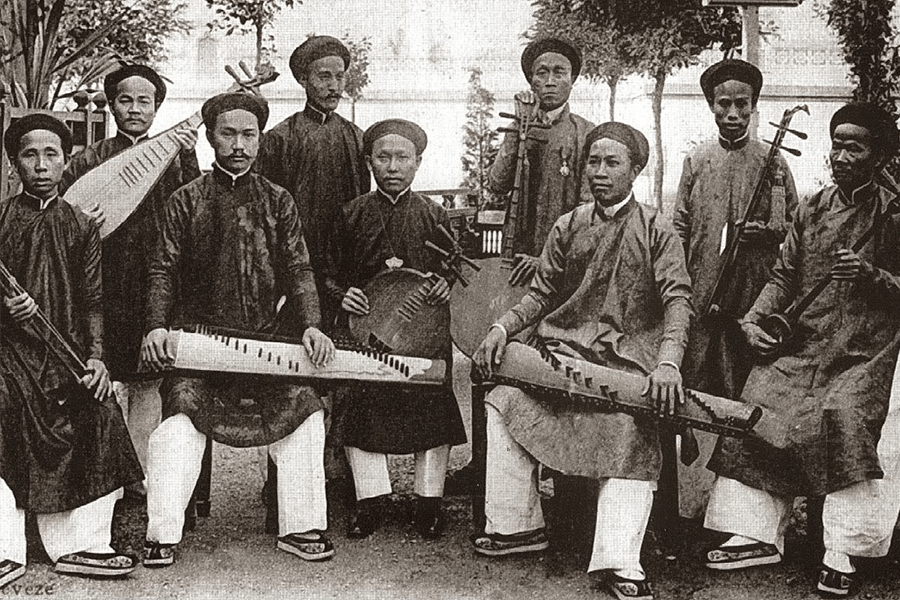 Vietnamese traditional music is rich by the accumulation of genres not only of different ages but also of numerous ethnic groups. Although having the same genre of music, each ethnic group has a distinctive mode of expression, performance, and cadence. For example, the lullabies of the Kinh are different from those of the Thai, the Muong, the Dao, etc. Moreover, some ethnic groups use lullabies to sing their children to sleep while others play a diversity of traditional musical instruments such as flute, Vietnamese monochord, and so on.

Vietnam has 54 ethnic groups, which means that there are 54 different traditional musical backgrounds. Therefore, in this article, we would like to mention the traditional music of the Kinh people – the dominant ethnic group in Vietnam, accounting for 85.7% total of the population.

There are various ways to classify Vietnamese Traditional Music (here, Kinh’s music). In terms of types of music, they have: Royal family music, Cheo, Tuong, Xam singing, Don Ca Tai Tu, folk songs, Ca Tru, etc. If divided by regions, they have: the traditional music of the South; the Central, the Central Highlands, the North, and so on or smaller by regional culture. For the number of performers, it can be divided into the single, duo, in a group.

Ca trù, also known as hát ả đào, is one type of chamber music that was extremely popular in North and North Central Vietnam since the 15th century. It used to be court music that was loved by the aristocrats and the intellectuals. Besides, it can be said that Ca trù is a perfect combination of poetry and music. 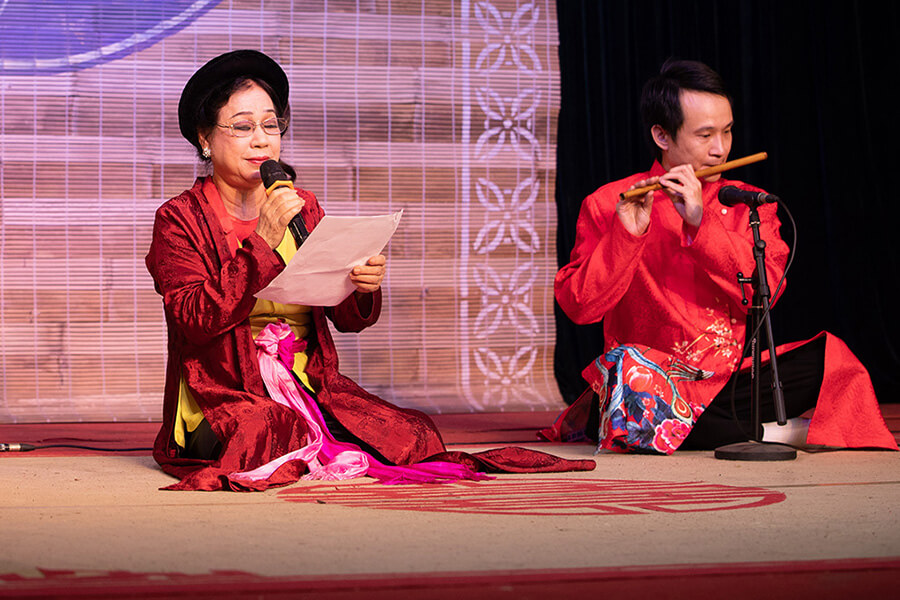 There are three main characters in a Ca trù performance: a female singer (called “đào” or “ca nương”) who uses the tongs, a male instrumentalist (called “kép”) who plays dan day to support the vocalist, a spectator (called “Quan viên”, usually being the author of the song) who plays the drum to punctuate the song and express the pleasure by the drum sound. In 2009, Ca trù was recognized as an intangible heritage that requires urgent protection by UNESCO.

Hát Văn or Chầu Văn is one of the types of Vietnamese traditional music, that originated in the North Delta. It is associated with Mother Goddesses Worship – the very famous folk belief in Vietnam. By using spiritual music with solemn and elaborate words, Chầu văn is considered to be a singing form of worshiping the goddesses. 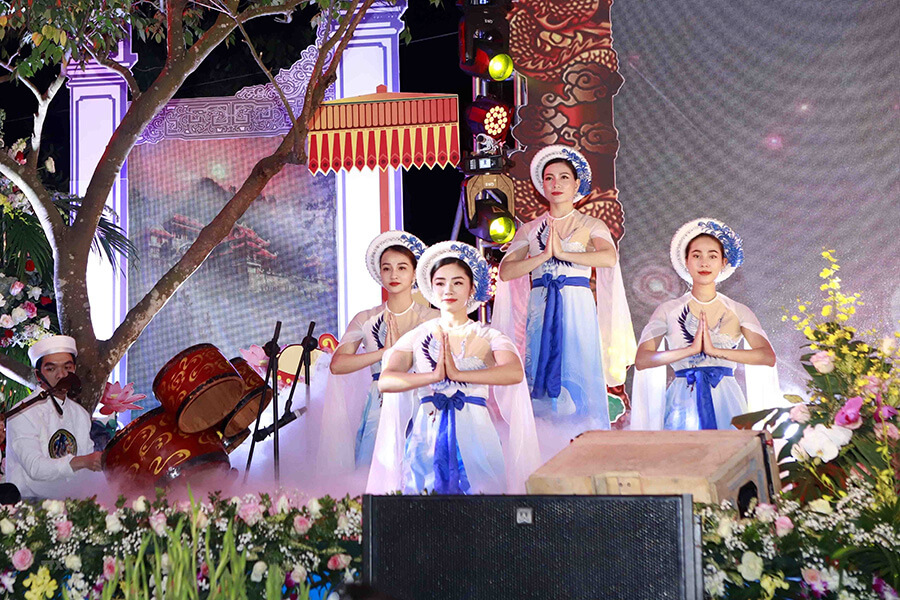 Chầu Văn plays an extremely important role in a Mother Goddesses Worshiping performance to invite the gods to attend the ceremony. During the performance, the singers can sing and play musical instruments at the same time for 4-8 hours, creating a bustling atmosphere for the ceremony. The music instruments usually consist of dan nguyet (moon lute), small drums, tongs, cymbals, flute, Vietnamese monochord, etc. Hát văn is well-known in Hanoi and Nam Dinh, but the performing style in Nam Dinh is more rustic than that in Hanoi.

Chèo is a form of Vietnamese traditional stage art, strongly developing in North Vietnam, especially in the Red River delta and two sparsely populated mountainous areas in the North and North Central. This type of folk music has a harmonious combination of ethnicity and popularity with narrative and romantic lyrics so it is amazingly preferable for summer festivals. 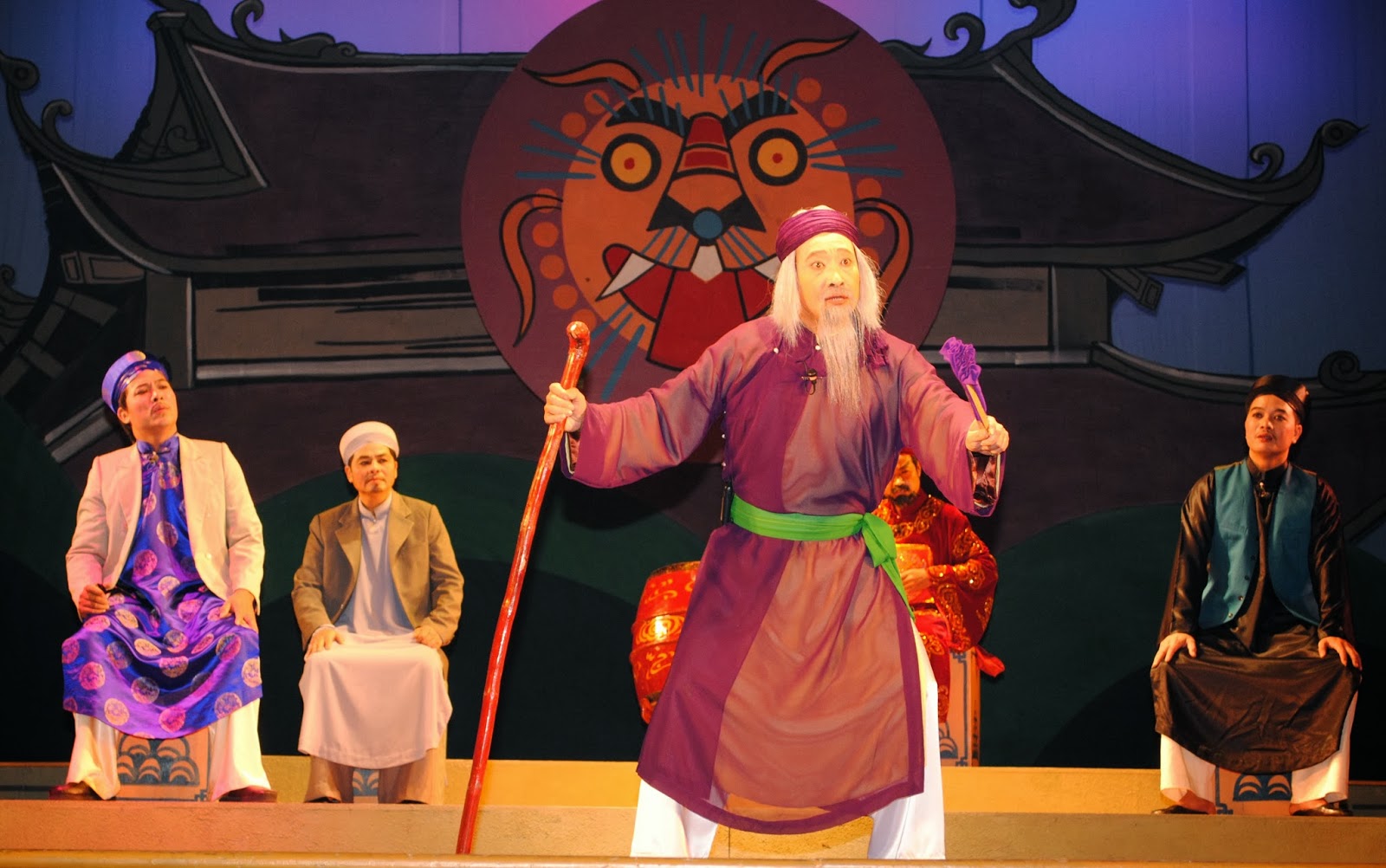 Chèo stage art has undergone a long history from the 10th century to the present, having a deep influence on Vietnamese social life. In terms of the meaning, Chèo reflects all aspects of the national identity of the Vietnamese people: optimistic, loving, simple, full of national pride, persistent in fighting against the invaders to protect the country. Thanks to these great meanings, Chèo is full of literary genres: romantic, epic, poetic, etc. creating a unique attraction for this traditional music.

Quan ho is one of the typical folk songs of the Red River delta in the North of Vietnam. It was formed and developed in the ancient cultural area Kinh Bac, especially the area boundary between Bac Giang and Bac Ninh provinces today with the gently flowing Cau river called “the river of Quan ho”. 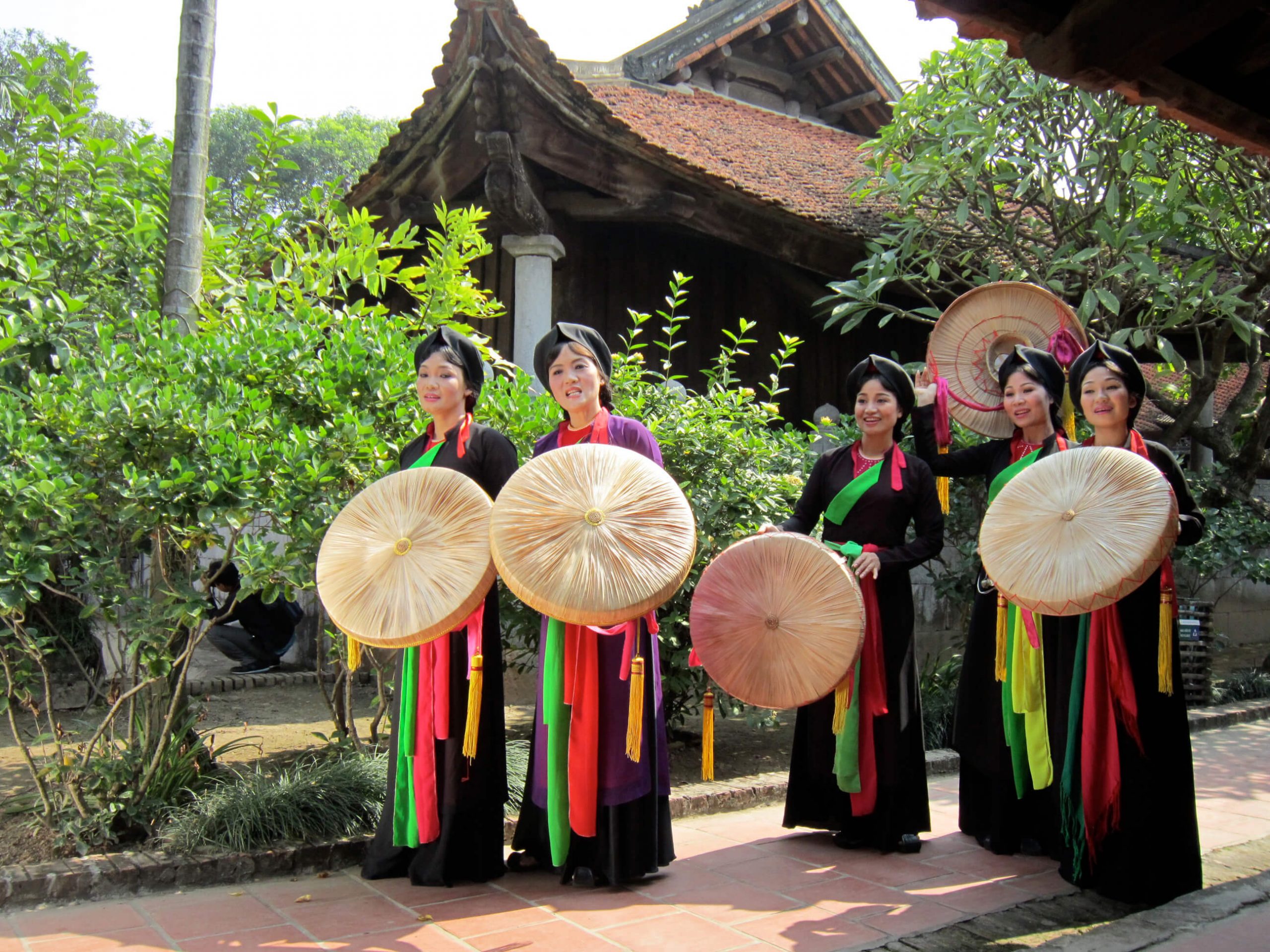 Quan ho folk songs are always performed in groups, each of which has five to six members. During the performance, they call each other the intimate names of the family members such as “Anh ca” (first brother), “Chi ca” (first sister), “anh hai” (second brother), and “chi hai” (second sister), etc. For this type of Vietnamese traditional music, the singers have their own performing costumes: the brothers with turbans, umbrellas, and tunics while the sisters are dressed up with “mo ba mo bay” shirts (a traditional cloth of the Vietnamese women) and large round hats and scarves. Quan ho folk songs impress the audience with an interestingly unique singing procedure. They usually divide into the “brother” group and “sister” group to sing back-and-forth the rustic and traditional loving songs with/without music accompaniment.

It is said that Tuồng is derived from the Vietnamese song and dance, but during its development, Tuồng has absorbed many forms of performance and makeup of traditional Chinese Opera. This kind of music usually expresses the majestic atmosphere to honor the national heroes, or to deliver the lessons of human behavior between community and individuals, between family and motherland. In a performance, the righteous forces have to fight for justice in very difficult conditions, becoming the bright mirror for the other people to follow. 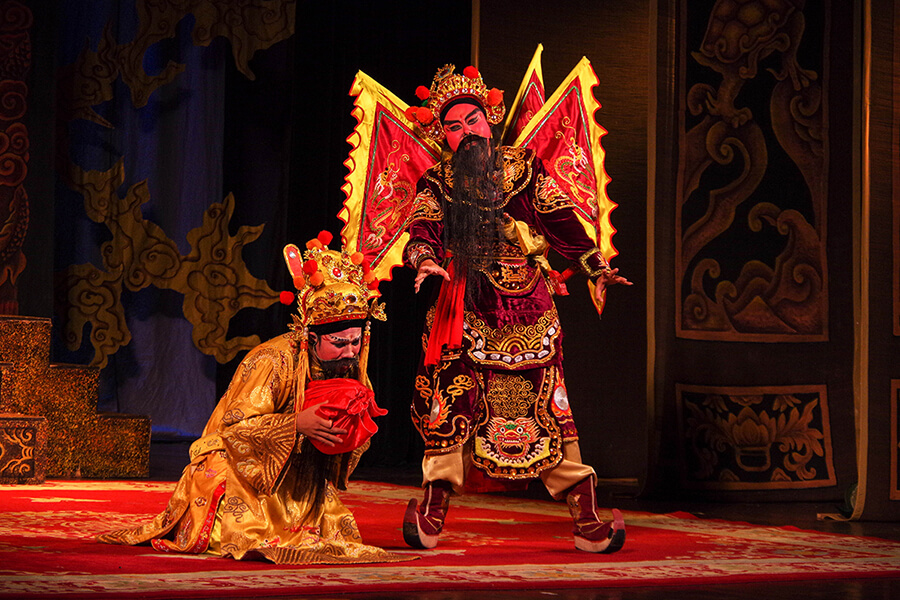 Xẩm is one popular type of folk music in North Vietnam, especially in the Red River delta and Northern midland. In the past, Xẩm is considered a form of livelihood for the poor and the dead people, most of whom usually performed in markets, streets, or crowded places, but few performed on big stages so very few people know this traditional music. The music instruments to support Xẩm singing are also very simple, including Erhu and Senh Tien. 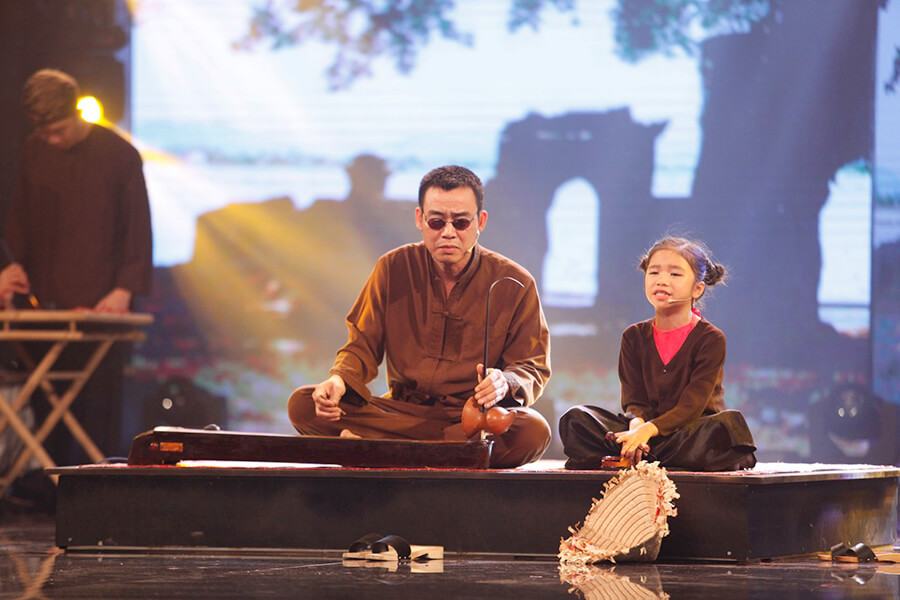 Until February 2013, Mrs. Ha Thi Cau – Ninh Binh province (1928-2013) who is supposed to be the last Xẩm singer of the 20th century went away, raising awareness of protecting this type of Vietnamese traditional music.

Hò and Lý are a popular musical genre in the Vietnamese people’s life from ancient times, originating from the living habits in the valley, depicting the mood and emotions of the laborers. These two types of Vietnamese traditional music are pretty similar to each other, but Hò is usually attached to a working movement while Lý is not. In addition, Hò and Lý have extremely been developing in Central and South Vietnam. Visiting these regions, you will find it easy to bump into the local people droning out the rustic genres of Hò and Lý. 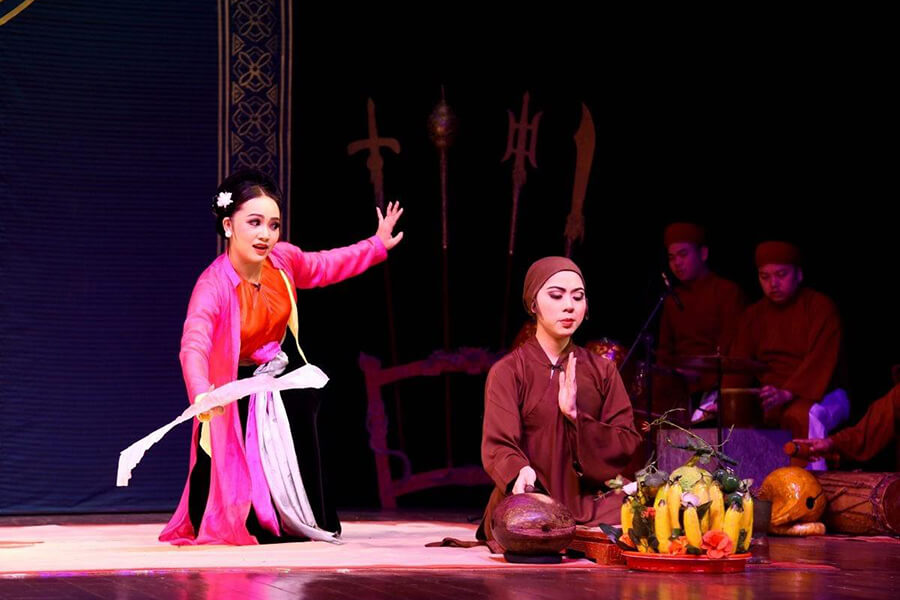 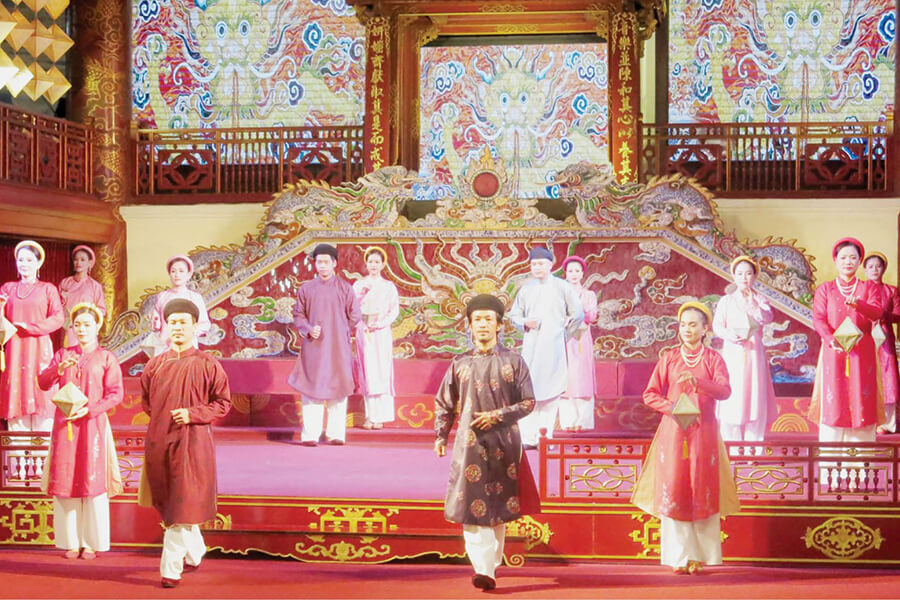 Nhã Nhạc has a diversity of 126 songs full of original lyrics and translations. Besides, there are hundreds of musical instruments supporting the Hue Royal court music performances. As a result, it is obviously to affirm that Nhã Nhạc is a type of Vietnamese traditional music with a tight structural system, partially contributing to creating: the complete structure of the orchestra, the system of orchestral music without lyrics, the music accompaniments for singing and dancing, the songs in different kinds of dance, and the songs in the ceremonies.

Đờn ca tài tử is the Vietnamese traditional music that was recognized as a world cultural heritage by UNESCO. It was established in the late 19th century, strongly developing and influencing 21 Northern provinces of Vietnam. This is one type of music combining lyrics and musical instruments, preferred by the Southern people in rural areas in their free time after a hard-working day. 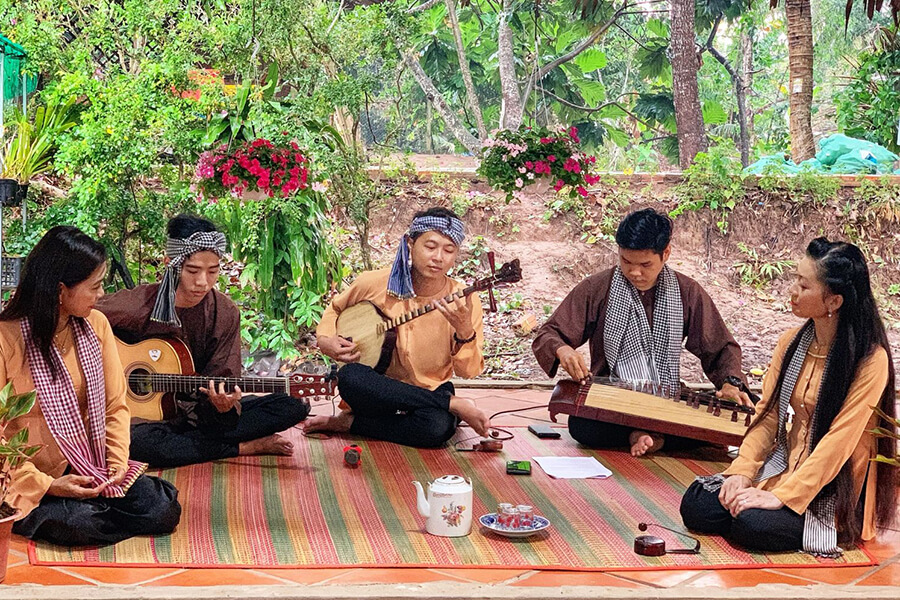 Đờn ca tài tử is over one hundred years old, usually known as the band performance, consisting of five Vietnamese traditional music instruments: dan tranh (zither), dan ty ba (pipa), dan nguyet (moon lute), dan bau (monochord), and dan tam; sometimes supported by the flute. The “đờn ca tài tử” singers are usually the friends or neighbors in a village; they gather and happily sing with each other so that they do not bother about the rustic costumes.

Cải lương is one kind of opera that originated in South Vietnam and was formed based on Đờn ca tài tử and the folk songs of the Mekong Delta. The content of each Cải lương performance may come from ancient Vietnamese stories, Nom poems, and literary works about Vietnamese society, and after that, the French scripts, Indian, Egyptian Romans, and Japanese ancient stories. The fusion of various cultures has shaped the special feature of this type of Vietnamese traditional music. 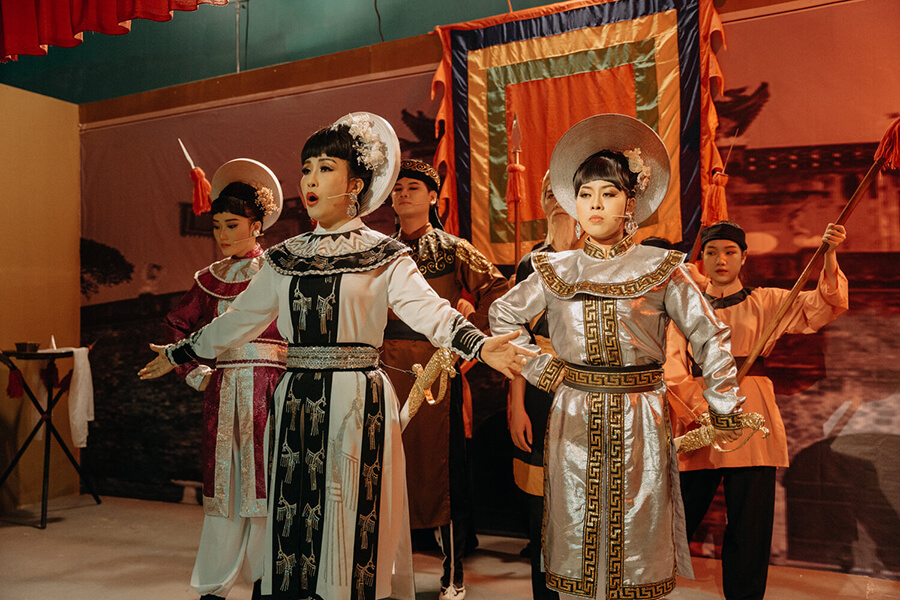 In addition, the performance of Cải lương will be not perfect without the musical accompaniment of the orchestra, which helps not only support the vocals but also highlight the psychological depth of the characters, creating more drama for the script, and contributing to the success of the play. Nowadays, Cải lương is also an extremely popular type of Vietnamese traditional music in the South, strengthening the spiritual life of the local people.

If you fall in love with some kind of Vietnam traditional music,  the show totally can be in your  Vietnam Tour Packages, or you can click here for a tailor-made tour with the show you want.