Vietnam is officially an atheist state, as declared by the country’s communist regime. Even so, most Vietnamese are not atheists because 95% of the population practice a religion or beliefs. Every year, there are nearly 8,500 religious events taking place across the country. The majority of religions in Vietnam are unique to the country which are 7 major religions including Vietnamese folk religion, Buddhism, Catholicism, Caodaism, Protestantism, Hoahaoism, and Islam, along with several folk religions.
Get to know Vietnam by leaning a bit about the religions practiced in the country will be an indispensable factor if you are planning to pick a Vietnam Tour Package.
Without further ado, below are an overview of major religions in Vietnam!

According to the Pew Research Center, folk religions are practiced by 45.3% of people in Vietnam, making this the most dominant religion. Vietnamese folk religion is not an organized religious system, but a set of local worship traditions devoted to ancestors, national heroes, and gods of nature. Given the importance of this indigenous religion to communities and families across Vietnam, Vietnamese people are actively encouraged to worship the gods, deities and cultural heroes associated with Vietnamese folk religion. 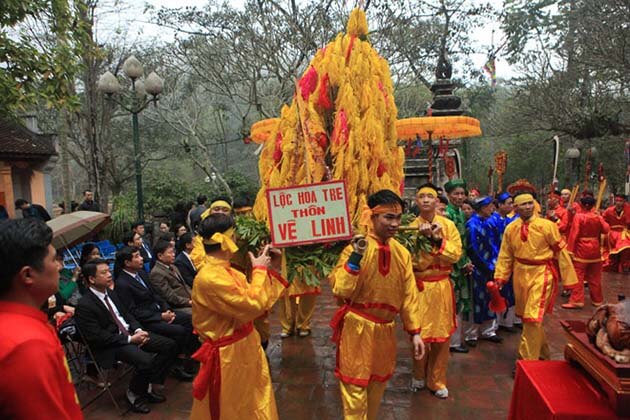 When traveling to Vietnam, you will have the chance to visit numerous temples worshipping deities such as Wind, Forest, Fire, Water, and Ocean Gods. You can also find many houses built mainly to give incense and offerings to the ancestors of a family. Even today, on the ancestor’s death date, the younger generation will hold memorials to remember and express gratitude to the deceased. Besides, the national heroes like Tran Hung Dao or the country creators like Hung Kings and Au Co – Lac Long Quang are also worshipped.

The second dominant religion in Vietnam is Buddhism which accounts for 12.2% of Vietnamese people. This religion has an equally long history in Vietnam, thought to originate in at least the 3rd century due to visits from delegations from India and China. The tradition in Vietnam is predominantly described as the Mahayana Buddhist tradition – the largest major tradition of Buddhism in the world – which focuses on the path to complete enlightenment for the benefit of all sentient beings. 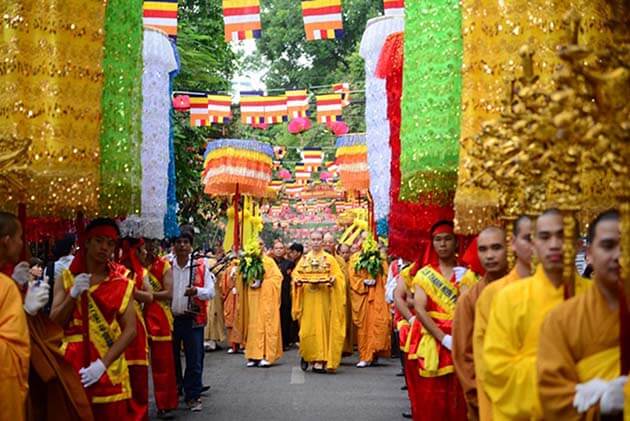 It is common to witness Buddhist monks chanting sutras, such as Lotus Sutra and Amitabha Sutra, and praying for rebirth in a Pure land when one visits these temples. The belief is that liberation can only be attained with the guidance and help of Buddha. Therefore, all the devotes practice three services regularly, at dawn, noon, dusk and engage in chanting sutras (sometimes aimed to purify bad karma), walking meditation, and confession during special services.

Catholicism is by far the most widespread Christian church in Vietnam and was introduced to the country by Portuguese Catholic missionaries in the 16th century. In the past, Christians had undergone an extremely brutal time, especially under the rule of the Trinh lords (clan of rulers of Northern Vietnam) and the Nguyen lords (rulers of Central and Southern Vietnam. While the Trinh lords had a hostile disposition towards the religion, Nguyen lords were relatively tolerant. Hence, Christians were more inclined towards the Southern than the Northern parts of Vietnam. 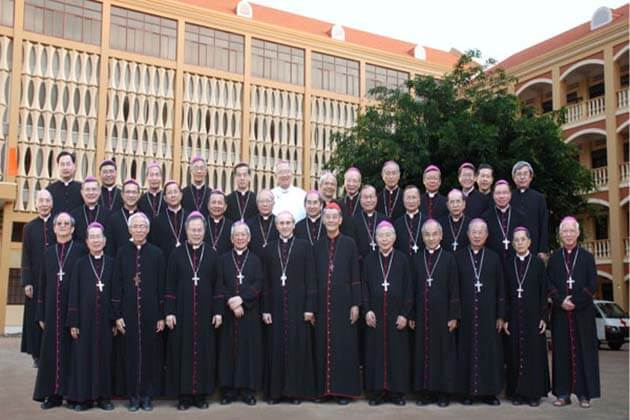 Since then, there have been many changes when it comes to power, and there was a time when even Christians used their power to oppress non-Christians, especially Buddhists. But currently, the Government authorities are more relaxed in their treatment towards Christianity and Christians in Vietnam so that it can openly celebrate holidays such as Easter, Thanksgiving, and even hold gatherings in Churches. Moreover, Catholics in Vietnam can offer incenses to their ancestors as long as the family altar is not above Jesus altar and the offering is not an item encouraging superstition.

The Cao Dai religion was founded officially in southern Vietnam in 1926. It is a monotheistic religion that credits God rather than any prophet or Buddha as its founder. The followers of this religion engage in practices such as ancestral worship, vegetarianism, prayer sessions and even nonviolence with the goal of freeing oneself from the cycle of birth and death.
Another unusual element of Caodaism is a belief in “priests”, divine agents who could make contact with God and convey God’s instructions to adherents. Though Caodaoism was initially condemned by Communists, now it’s tolerated and has about 8 million followers in Vietnam, with approximately another 30,000 in Australia, America, and Europe.

Protestantism only came to Vietnam in 1911 after the arrival of a Canadian missionary, Robert A. Jaffray. Soon after his arrival, a church was established in Danang. Now, it is estimated that more than half of all Protestants in Vietnam are ethnic minorities living in the northwest highlands, including Hmong, Thai, and Dzao.
According to government statistics, after about 120 years in Vietnam, religion now has 1.5 million followers (approximately 2% of the population), and 400 worshipping places. 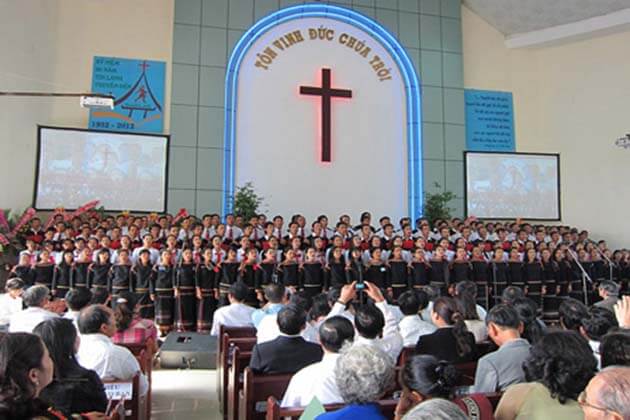 Hoahaoism is a reformed Buddhist sect of a Buddhist ministry known as “Strange Perfume from Precious Mountains”. Rather than worshipping primarily in the temples, Hoahaoism emphasizes the practice of Buddhism at home by lay people, especially the peasants, as the old slogan teaches — practicing Buddhism while farming your land.
Hoahaoism has claimed nearly two million followers in Vietnam. In its birthplace, the Mekong Delta region, more than 90 percent of the population practice it. In the Hoa Hao home, they place a plain brown cloth as an altar at which the family prays morning and night and only freshwater, flowers, and incense are used in worship without bells or gongs accompany prayers. Further, if a person is not at home, then they can face the west to say their prayers to Buddha. Adherents are expected to attend communal services on the 1st and 15th of every lunar month and also for other Buddhist holy days.

Islam was first introduced to Southeast Asian countries in the 11th and 12th centuries. The religion is practiced mainly by Cham ethnic groups (present Southern Vietnam) and divided into two branches. One is the Chan Bani (a combination of Islam and Brahmin which had been the main religion in Champa before Islam), and the second one is Cham Islam, which is similar to Islam around the world. Most of Cham Bani followers are from Central Vietnam while Cham Islam followers are in the South. In total, there are about 0.1% of Vietnamese are Muslims. 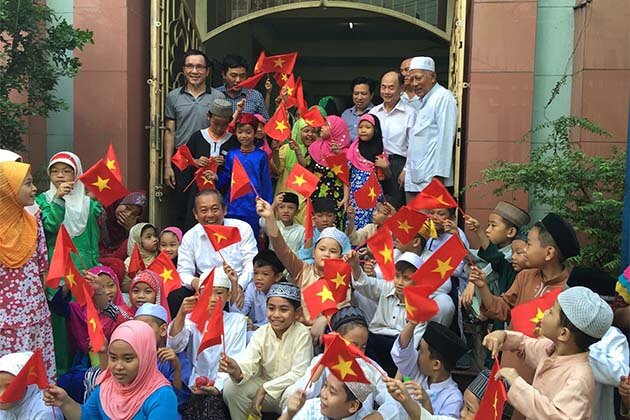 Other Religions in Vietnam

Besides the 7 major religions, there are many small religions and sects in Vietnam such as Tinh Do Cu Si, Baha’s, Buu Son Ky Huong, Tu An Hieu Nghia, Minh Su, Minh Ly, and Brahmin. Their followers represent 1% of the population, creating the diversity of religions in Vietnam.

For more information, check out Vietnam’s summary of Vietnam Ethnic Group and Culture and visit our Vietnam Travel Guide if you want to get more useful facts about this wonderful country.