Vietnamese traditional games have played an important role in its culture from time to time. They have still been very strong and magical attractions to all Vietnamese children. Stories of these games spread into every corner of the country. That is why you might have the opportunity to encounter traditional games on your Local Tour in Vietnam as a foreign tourist.
The most popular folk games must be listed are: “Rong ran len may” (Dragon and Snake), “Meo duoi chuot” (Cat and mouse game), “O an quan” (Mandarin Square Capturing), O an quan (Tug of war), etc. More than fun, these folk games would enhance the intelligence and observation ability in children.
And if you have the chance, we – Vietnam Local Guide suggests that you should try at least once of those folk games to catch a grasp of Vietnamese traditional life. Check it out!

This game consists of more than seven members in one team. They stand in a circle, hold and raise their hands over their heads. Then, they will choose a person to play the cat and another to play the mouse. Both stand back to back in the middle of the circle.

How to play Cat and Mouse Game

When someone counts from 1 to 3, the mouse starts running and the cat must chase after it. The cat wins the game when the mouse is captured. At the beginning of the game, everyone in the circle also start singing a song, usually a folk song. Moreover, the children forming the circle also can make it more difficult for the mouse or cat to run through them. Then the mouse will act as the cat in turn. The game continues.
Although “Meo duoi chuot” has appeared for a long time, this Vietnamese traditional game has been being played from time to time. 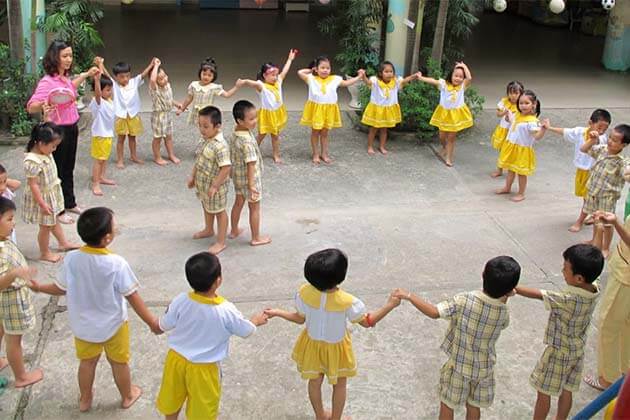 Dragon and Snake game is one of several famous Vietnamese traditional games that attract every child in the country. Whenever having free-time, they often play it to have fun, which expresses a part of Vietnam tradition and customs.
There are two players in this game including a doctor and a long dragon with a tail. The long dragon includes more than 5 people. The doctor flies to attempt to catch the child who represents the dragon tail. The head of the dragon stretches his arms to prevent the doctor from finding his tail while the tail tries to hide and form a circle.

How to play Dragon and Snake

Like Rong Ran Len May or Chuyen, O An Quan (literally “Mandarin Box”) is also a very popular game played by everyone. This 2-player-game is played on a rectangle on the ground which is divided into ten small squares called “rice fields” or “fish ponds”.
There are two more semi-circles drawn at the ends of the rectangle called “mandarin boxes”. Each player has 25 small pebbles and a large stone in which 50 smaller pebbles represent the peasants and only 2 mandarins represented by bigger stones. Each square has 5 pebbles that are placed in the semi-circles. 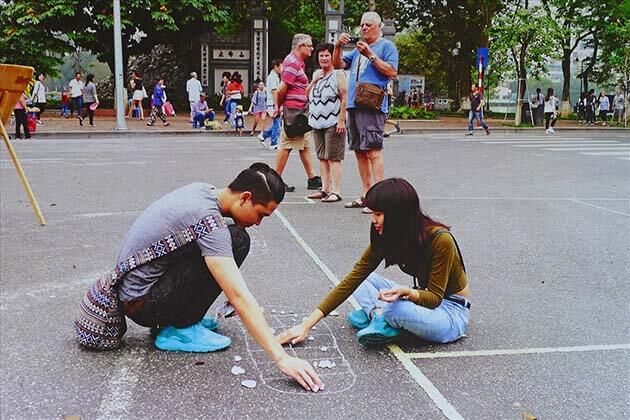 How to play Mandarin Square Capturing

The game begins with the first player taking up the pebbles of one square on his side of the board and distribute the pebbles one by one, starting with the next square in either side. The player can take all the pebbles inside a square which is next to an empty square as captives. He loses turn if 2 consecutive blank squares or the square followed an blank square is a Mandarin Box. Turn is given to another player once a player takes the pebbles of one square. If all five squares of one player are blank, he must place one captive pebble per square to continue playing. The game ends when there are no mandarins on the board. The winner is the one that has more captives.

Tug of war is a game that people of all ages can take part in. It helps promote the strength, teamwork, and raise the “never-give-up” spirit of the participants. You might be surprised to find out that tug of war has become an Intangible Cultural Heritage of Humanity icons recognized by UNESCO in 2015.

How to play Tug of War

Players are divided into two teams and stand face-to-face along a bamboo rope. There is a red piece of cloth marking the middle of the cord. After the referee gives the signal, players tug the rope as hard as possible to pull the red cloth towards their side. Eventually, one team loses strength and let’s go of the rope; the audience cheers the other team as winners.
This game is appealing to people of all ages because it is easy to play and although it is competitive, it still brings fun to all participants. To them, winning or losing does not matter as it is not as important as unity, joy and community harmony. 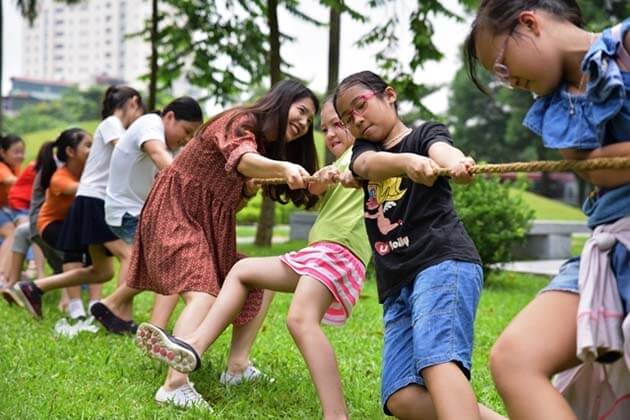 Spinning tops is a game for boys. Usually, it is played in 2 groups, and these can be divided into more groups if there are more players. You can also play it alone but it is more fun and exciting if you have more friends cheering for you. In the countryside, most children make their tops from guava, jackfruit, or longan wood. Sometimes they fashion tops from buffalo horns, though there tops are rare because horns are harder to obtain and more difficult to shape. Meanwhile, children in the city frequently use wood scraps left from making furniture to fashion their tops

How to play Spinning Tops

To play, a player needs to have a “spinning top”, which is made of wood or animal horn and is cone-shaped. A wire is wrapped carefully from bottom to top and then the top is spun on the ground. The spinning top that that spins the longest is the one that wins. Players can use their tops to hit those of their opponents. If their spinning top stops, they lose the game. If students who are learning Vietnamese can try this game when visiting the Vietnamese’ countryside.

This is another popular traditional game, especially among the girls. The game’s rule is simple, including tennis or any bouncing ball and 10 chopsticks (5 pairs) 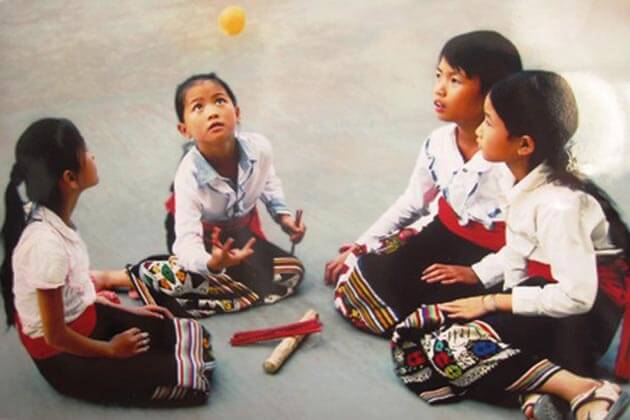 How to play Bamboo Jacks

Starting with all of the chopsticks on the ground, throw the ball upward, pick up a chopstick with one hand and catch the ball with the same hand. Continue until you have picked up all the chopsticks on the ground. If a player’s hands are not swift or if her eyes are not sharp, or if she fails to coordinate the two, she will lose her turn. Then the turn will pass to the next girl.
Playing Bamboo jacks warms up the body and creates a lot of fun. During summer or autumn, this game is played everywhere from the shade of a village banyan tree to a deserted market stall.