Aodai is one of the indispensable costumes of Vietnamese people. Through the ups and downs of history, it still retains its cultural values.  Ao Dai not only honors the gentle beauty but also the curve of body Vietnam’s women. Besides, it is recognized as the cultural heritage of humanity by UNESCO which must be preserved and promoted. Over many years with many variants, Ao Dai still retains its inherent tradition. Ao Dai Viet Nam appears is still “Aodai” in the English dictionary, demonstrating the strong symbol of the ethnic beauty of this traditional costume.

From the 17th century to 19th century, having the appearance of a five-part dress from the four-part dress. Dress with five lapels brings the symbols of the five elements: Venus, Jupiter, Mercury, Mars, Satur which honor the person who wears it. Western culture gradually entered Vietnam, bringing a lot of changes. With its unique design, modern design and gentle beauty, it is necessary to combine with silk pants to make the woman feminine. With its unique design, modernity and gentle beauty, Ao Dai just needs to be combined with silk pants to make a woman become more beautiful than ever. Nowadays, many designers design consecutive new and innovative for their collections. This is a very important step, it still keeps the tradition on one side, but catches up with the new trends of global fashion.

An elegant conical hat is a part of Vietnamese costumes for female. This conical hat is especially suitable for a tropical country like Vietnam, where strong sunshine and heavy rain are commonplace. To make a conical hat, a hat maker have to choose young leaves and have been dried under the sun for days. Below the hat is a drawing of a river wharf and a piece of poetry written by outstanding artisans.

In order to increase the beauty of the woman and hold the hat on the wearer’s head, a soft silk strap is attached to the inside of the hat. Hue colonial hats can be said to be the most attractive ones which are chosen as a souvenir by many tourists. Many visitors come to the traditional village where conical- palm hat is made to see, participate in the hat making process, and create themselves the hats with their own styles and designs.

If you have seen the delicate costumes of Vietnamese women, then you will easily recognize the similarities in traditional between women and men’s costumes. Both outfits are designed from the same silk fabric. 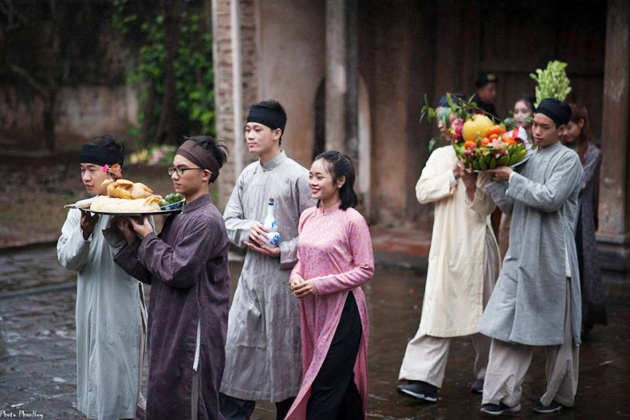 The shirt with a high neck, straight and square symbolizes the integrity of the military. Cloths are made of metal, jade or wood, … different from the coat made of China. Ao dai for male has five bodies representing: father, mother, parents-in-law and the body which the smallest and the inside representing the person wearing it. Sleeves are maybe wide or narrow depending on the size of wearers

To make a traditional turban, the maker has to go through seven stages such as cutting fabric, cutting sponge, sewing, roll, drawing flowers. Turban is made of special fabric for the head and there is one the color to make: This is black. Along with the development of society, they are gradually transformed into all kinds of designs and colors. Besides the normal turban, there are other kinds of turban: for the festival, for services, special occasions (APEC Conference in 2006 ) or ethnic arts ( Cheo, Tuong… ) 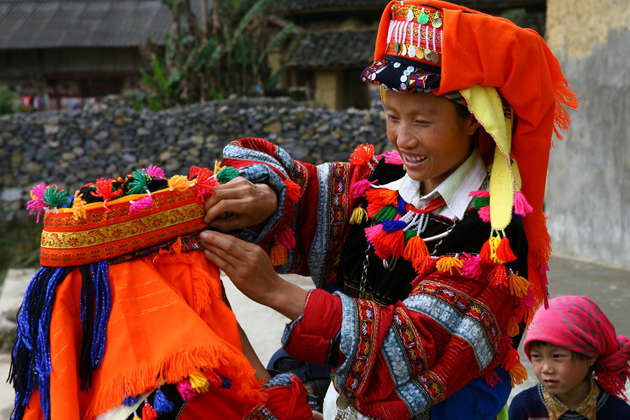 In the mountains, people live in houses on stilts, in trousers or skirts and indigo with designs that mimic flowers and wildlife. In the Northern Mountains, women make skirts and coats with the colorful decor in a convenient style for farming in terraced fields and traveling on hilly slopes. Along with the handmade dress, different types of silver jewelry such as bracelets, necklaces, earrings are indispensable things in the life of ethnic people.